These LGBTQ+-friendly bars and pubs are guaranteed to show you a good time, year-round.

With LGBT+ History Month just around the corner, Dry January almost behind us, and Pride hopefully going ahead this year, we thought what better way to celebrate than coming up with this roundup of some of London’s best LGBTQ+ bars.

Whether you’re looking to have a drink in one of these famous establishments during LGBT+ History Month, or want to hit the town any other night of the year, these LGBTQ+-friendly bars and pubs are always packed with fun and a hell of a great time.

Chilled out brunches by day, rowdy fun by night: Dalston Superstore is your go-to destination for great food and smashing parties on Kingsland High Street. Head to the bar and restaurant first, and end the night on the basement dancefloor amongst a lively, diverse LGBTQ+ crowd. 117 Kingsland High St, E8 2PB, nearest station is Dalston Kingsland.

Is singing tunes your idea of a fun night out? The Karaoke Hole is Dalston Superstore’s little sister venue, and unites the excitement of drag shows with live karaoke, inviting party people to own the stage themselves. They also have host shows, and bottomless prosecco pizza parties — do you need any more reason to go? 95 Kingsland High St, E8 2PB, nearest station is Dalston Kingsland.

This one was a must on this roundup of London’s best LGBTQ+ bars and pubs. The Glory prides itself in being one of east London’s best gay bars, drag hothouses, LGBTQ+ performance venues, nightclubs, and curators of London shows, festivals, contests and battles. You can find drag shows and LGBTQ+ arts events taking place here most evenings, and smashing late-night parties on the weekend. 281 Kingsland Rd, E2 8AS, nearest station is Haggerston. 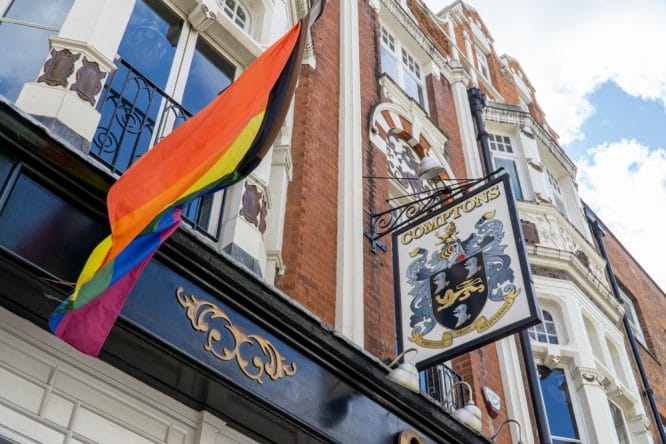 Comprising of two bars and a quieter lounge area, Soho’s Comptons pub has been a staple in the city’s gay scene since 1986. With weekly pub quizzes and lively DJ nights, this place is surely a favourite amongst locals in Soho and beyond. 51-53 Old Compton Street, W1D 6HN, nearest stations are Leicester Square and Piccadilly Circus.

The Royal Vauxhall Tavern has a long, proud history as a party destination for celebrities, drag queens, and the great and good of the LGBTQ+ community, with the site’s first drag shows dating back to after WW2. More recently, in 2015, it became the first building in the UK to gain Grade II-listed status on the basis of its importance to the LGBTQ+ community, and throws some of the city’s best drag events to this day. 372 Kennington Ln, SE11 5HY, nearest station is Vauxhall.

Perhaps one of London’s most well-known LGBTQ+ bars (partly due to its name), is Soho’s G-A-Y Bar. Start your early evening at this three-floor party bar with music and a drink or two, and end up at G-A-Y’s late-night club which is located just around the corner, at 5 Goslett Yard, WC2H 0EA. 30 Old Compton St, W1D 4UR, nearest stations are Leicester Square and Covent Garden.

These sister venues run by the Ku Group are amongst London’s most celebrated LGBTQ+ nightlife spots. Ku Bar at Leicester Square and Little Ku in Soho are both pre-club bars serving cocktails and champagne, as well as nightly DJ entertainment, and early-night parties in low-lit basements. Find Ku Bar at 30 Lisle St, WC2H 7BA, and Little Ku at 25 Frith St, W1D 5LB, nearest stations are Leicester Square and Piccadilly Circus.

Rupert Street Bar is a lively spot for a cocktail evening before hitting the clubs of Soho later at night. With large windows, the bar is a fantastic place to people-watch, and the best part is, their happy hour starts at noon on Saturdays and Sundays! 50 Rupert St, W1D 6DR, nearest stations are Leicester Square and Piccadilly Circus.

Freedom is a funky bar and club with a ‘theatrical atmosphere’, cabaret club events, and luxurious decor in the heart of Soho. In addition to a dedicated basement club area with dance poles and DJs, there’s also a more quiet cocktail bar on the ground floor. 60-66 Wardour St, W1F 0TA, nearest stations are Leicester Square and Piccadilly Circus.

Thoroughly deserving its place on this roundup of London’s best LGBTQ+ bars, The Yard is a clear winner for summer nights, boasting a large heated garden courtyard and balconied loft bar with plenty of space. The inside space is just as attractive, and you can expect an extensive cocktail menu served by barmen who, according to their website, are ‘pretty tasty’, too… 57 Rupert St, W1D 7PL, nearest stations are Leicester Square and Piccadilly Circus.

At Circa Soho, you can enjoy a relaxed mid-week drink or a crazed party weekend accompanied by an impressive roster of DJs. They also have a generous outdoor seating area on Frith Street, and are open daily from 1pm. For a later night out, you can head to Circa’s Embankment nightclub, which is open until 4am on Fridays and Saturdays. Find Circa Soho at 62 Frith St, W1D 3JN, nearest station is Tottenham Court Road, and Circa Embankment at Hungerford House, Victoria Embankment, WC2N 6PA, nearest station is Embankment.

This small indie bar celebrates iconic rock and pop figures, from Bolan to Bowie, while playing the best of 70s, 80s, New Romantic, goth and alternative music. In line with the Retro Bar theme, there’s also a jukebox, and many other fun nods to old school culture. 2 George Ct, WC2N 6HH, nearest station is Charing Cross.

Another popular LGBTQ+ spot in Clapham is The Bridge Bar, a charming wine bar nestled under a railway arch. With both indoor and outdoor space available, guests can enjoy a variety of wines and cocktails, and participate in quizzes, games, drag shows and music nights. 8 Voltaire Rd, SW4 6DQ, nearest station is Clapham Common.

The Queen Adelaide comes from the team behind Hackney’s infamous George & Dragon pub, a well-known east London LGBTQ+ venue which was forced to shut down in 2015. The new pub in Cambridge Heath is a vibrant space with a basement bar pouring draught beer, cider, and a selection of wines and spirits, and is open until 3am on Thursdays, Fridays, and Saturdays. 483 Hackney Rd, E2 9ED, nearest station is Cambridge Heath.

The 200-year-old Cock Tavern (cock as in bird, obviously) calls itself a ‘free spirited Free House’, perfect for after work drinks to midnight tipples. The Georgian Tiki-style bar serves classic cocktails and a selection of beers and wines in dim lighting, with eclectic decor adding to the tiki vibes. Make sure to try their ‘Cock Punch’! 340 Kennington Rd, SE11 4LD, nearest station is Kennington.

Colours is a multi-arts bar and club on Hoxton Square, serving as a lunchtime hangout and creative hub during the daytime, and a spot for wild and wonderful events at night. They host disco bottomless brunches, cabarets, drag shows and battles, music nights, and more fun events. 2-4 Hoxton Square, N1 6NU, nearest station is Old Street.

This independently run East End pub has everything you could wish for, including a beer garden, pool table, a function room for weekend DJ events and live cabaret shows, as well as a big selection of real ale, wine, and beer. The Old Ship also hosts regular charity events for St Josephs Hospice and The Albert Kennedy Trust, which is pretty cool. No wonder then that we had to feature it on this list of the best LGBTQ+ bars in London. 17 Barnes St, E14 7NW, nearest station is Limehouse.

Located on Soho’s Poland Street and open since the 1700’s, the friendly Kings Arms was one of the first spots in Soho to serve the gay community, billing itself as a ‘gentlemen’s bar’ in the 1970’s. Officially a gay bar since 1981, it’s now a firm favourite with the LGBTQ+ community – ‘bears’ in particular – from London and around the world. Everyone is welcome here and they also have a legendary karaoke night on Sundays. 23 Poland St, W1F 8QJ, nearest station is Oxford Circus.

Another Soho stalwart, the Duke of Wellington has been serving the LGBTQ+ community for over twenty years now, and they take pride in being a welcoming and lively local boozer. Affectionately nicknamed ‘The Welly’, it’s got friendly staff, cheapish beer and regular drag bingo nights, as well as DJs spinning tunes at the weekends. What more could you ask for? 77 Wardour St, W1D 6QA, nearest stations are Leicester Square and Piccadilly Circus.

Go Green & Give Emeralds This Christmas