London is known as one of the biggest cultural melting pots in the world, with food present from nearly every single corner of the globe. That includes from all over the Herculean continent of ‘Mama Africa’ – an incredibly diverse place whose eclectic cuisine runs a whole gauntlet of mouth-watering flavours. And while whittling down an entire continent into just twelve spots isn’t exactly the most in-depth examination, we thought that it was a pretty damn good place to start. Here’s our rundown of twelve of the best African restaurants in London where you can try some tasty African cuisine:

Upgraded from one Michelin-star to two this year, Ikoyi has made plenty of waves since it first swung open its doors at the tail-end of 2017. Named after a district in the Nigerian capital of Lagos, this polished spot offers a distinctly contemporary twist on authentic West African flavours.

Head chef Jermemy Chan has built a whole menu around a vast collection of spices – all sourced from West Africa –  which he combines with seasonal British ingredients. The result is an eclectic melting pot of flavours – think plantain smoked kelp with blackberry, 120-day aged Angus rib steak with saffron soubise and – of course – delicious smoked Jollof rice.

The full tasting menu will cost you a fairly dear £180 per person – it is very worth it mind –, but their lunch menu comes in at just 60 quid. 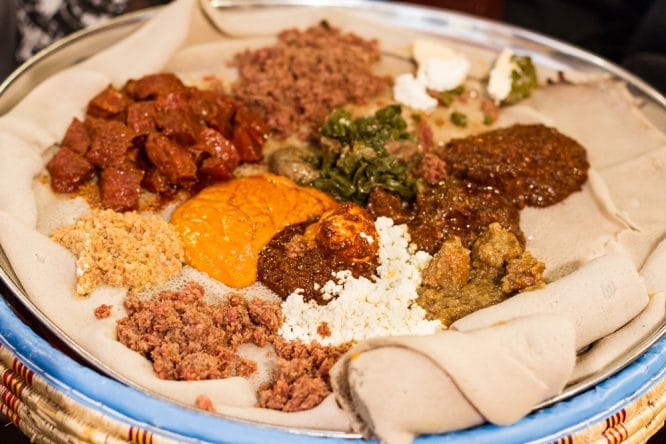 Located just around the corner from the Emirates Stadium in Holloway, North London, Wolkite Ethiopian Restaurant isn’t exactly hard to find. Unlike with football though, you’re actively encouraged to use your hands here.

That’s because this family-run spot rustles up injera – a large, sour flatbread made out of fermented flour – accompanied by many different varieties of spicy stew. The name of the game here is to simply tear off a piece of injera, grab some food with it, roll it up, pop the whole thing into your mouth and repeat until finished.

Wash it down with some sweet honey wine or a couple of ice-cold bottles of Meta lager, and you’ll be able to see why this lovely place features on this list of the best African restaurants in London.

Now a Peckham institution, Kudu is a family-run collective consisting of a restaurant, a cocktail bar, a gallery and a private dining room right next to Queen’s Road Station.

Owners Amy and Patrick originally hail from South Africa, and their roots inspire both their extensive collection of cuisine and their drinks too. Sourced as much as possible from local suppliers, the ingredients used here are designed to celebrate both hunters and foragers, and they even use some of their own herbs and vegetables from their very own garden.

Expect a seasonal menu here, with lip-smackingly good dishes including onglet with hispi cabbage, enoki mushrooms and truffled potato moose, and scallop potjie with  sea rosemary. Let’s not forget the Kalahari spiced biltong while we’re at it! 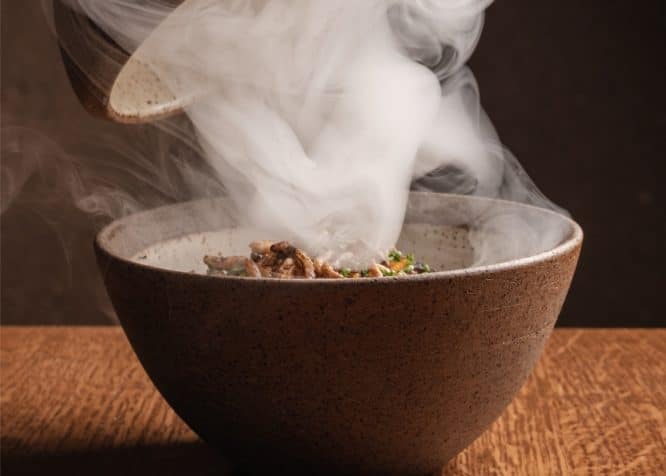 This fine-dining restaurant reopened its doors back in November of last year, with a new head chef at its helm. The man in question is Theo Clench, who has been working closely with founder Aj Akokomi to really nail the intricacies of traditional West African cooking, before adding modern British twists.

Whether you choose to indulge in the six- or nine-course tasting menu, you can expect the highest quality British produce, seasoned with a mix of spices usually seen in West African dishes. Carlingford oyster, cooked on coals in a Gambian stew and Isle of Mull scallops with peanut oil and shito are just two of the melt-in-your-mouth dishes you can expect to find here.

Pair this with some excellent wines and you’ve got yourself a pretty bloody great night in store at Akoko.

Ok, let’s get this out the way. In a sea of restaurants which have stopped their BYOB policy over recent years, Khamsa still – yep, still – offers you the chance to bring your own beer, wine and champagne (oh darling!). The corkage is just £2.50 per head, which is pretty good going in 2022 if we so say so ourselves.

Now onto the food – it’s bloody fantastic. Hailing from Algeria, the friendly and attentive staff here cook up heaps of flavourful, slow cooked taginey-type meals as well as spicy meatballs with saffron and carrots.

They also offer a fresh mint tea which settles a full belly when you’re done, and cakes and confectionery are also made to order. What doesn’t this place do? 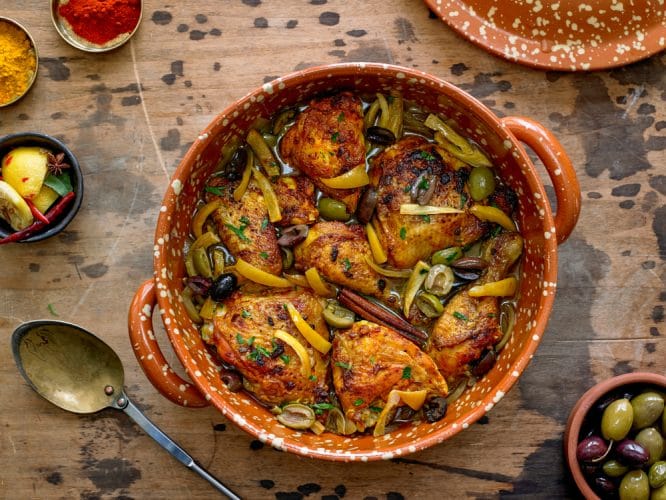 Another South London institution, Tagine whips up some of the best Moroccan cuisine you can find anywhere in town. Situated in Balham – just down the road from Tooting Bec Common – this lively spot is all about great food, authentic Northern African interiors and lovely staff, who have been serving the local community since they first opened their doors in 2004.

Starters like hummus, pastilla of chicken and carrot salad make for a great stomach warm-up before you take on hearty entrees such as vegetable tagine, chicken with preserved lemons, olives, onion compote and saffron or the vegetarian couscous.

This is real food for the soul, and boy is it good – no wonder it’s a frontrunner for being one of the best African restaurants in London.

Offering traditional, home-cooked recipes from the stunning island nation of Mauritius, it’s hard not to find yourself in paradise when wining and dining at Le Chamarel.

Right on Turnpike Lane, it’s a really great value spot with fantastic staff, who really make you feel that you’re a member of the family. With over 40 years’ worth of experience under their belts, as you’d expect, the food is pretty bloody delightful.

Expect fresh, top-quality ingredients and a smorgasbord of Creole, French, Indian and Sino-Mauritian dishes on the menu. Go for the fish vindaille curry or the king prawn fried rice and you won’t be disappointed. Promise. 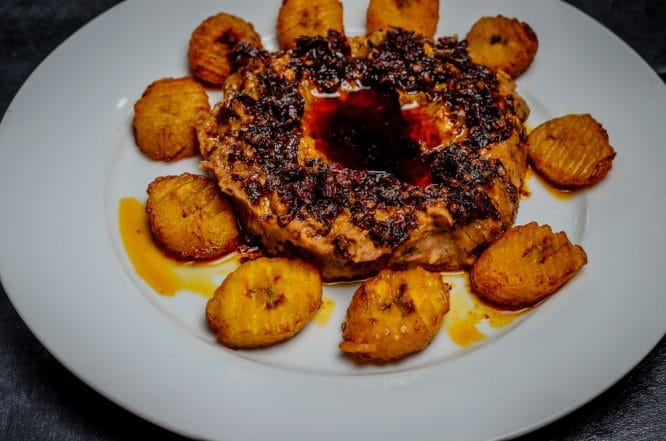 A strong contender for the best African restaurants in London crown here, 805 Restaurants opened their first branch on the Old Kent Road back in 2001. Since then it has become somewhat of an institution, with further branches opening up in Hendon, Reading, Nigeria and Ghana.

Rumour has it that John Boyega took Harrison Ford here while they were filming Star Wars: The Force Awakens, and it’s easy to see why. With a menu cultivated around authentic West African cuisine, the food here uses a whole array of ingredients such as okra, plantain, yams, beans and grounded dried shrimp, with a spice base of scotch bonnet, cumin, ginger and grated onion.

The result is a delightful mish-mash of dishes such as Cotonou honey beans with dried tomato and chilli sauce, traditional Jollof rice and their signature Monika fish.

Whipping up a whole host of freshly-prepared Congolese grub, this welcoming Tottenham favourite is a must-visit spot if you’re in this neck of the woods.

Their salt fish is supremely tasty – as is their grilled tilapia and fried steak – and they have a range of sides you can pair with whatever dish you choose. For something really traditional, go for the stewed beans at The Bash, or get slurping on an Egusi soup – a rich and savoury West African staple which is made up of ground melon or white pumpkin seeds. 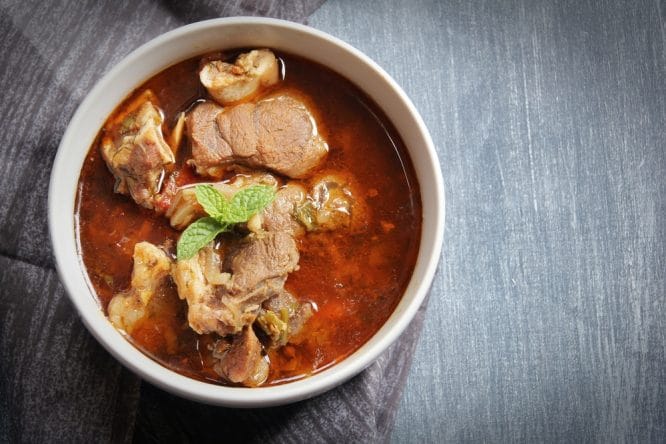 This community-run spot is a cultural epicentre for London’s Somali community, and this is reflected in its selection of food on offer.

A rustic, down-to-earth spot, The Village combines Italian fare with traditional Somali cuisine – a reflection of Somalia’s inclusion in Italian East Africa. Dishes include lamb shoulder with Somali corn maize, chicken breast with – wait for it – linguine, Somali fava beans and a mildly spicy sambusa served on a bed of crispy salad with a chilli dip.

For pudding, don’t miss out on delicious boiled date cake served with vanilla ice cream. Washed down with a traditional coffee or a fruit smoothie – the restaurant is alcohol-free – and you’ve got yourself a meal to remember.

Preparing dishes from across the diverse culinary culture of Nigeria, Enish brings you a real taste of the country and adds a special twist to some of the nation’s favourite dishes.

There are six branches dotted across the city – Brixton, Old Kent Road, Lewisham, Croydon, Finchley Road and Ilford – and each one whips up an incredible range of flavoursome fare.

From Jollof rice to lamb suya – a succulent dish of diced lamb mixed with an array of hot spices, garnished off with tomatoes and onions – there really is something for everyone here, and a reason why we had to include this one in our list of the best African restaurants in London. They’re also known to throw a good party, and have hosted nights for some of the biggest Nigerian artists and DJs.

You’ll find Enish at various different locations around the city. You can find out more via their website. 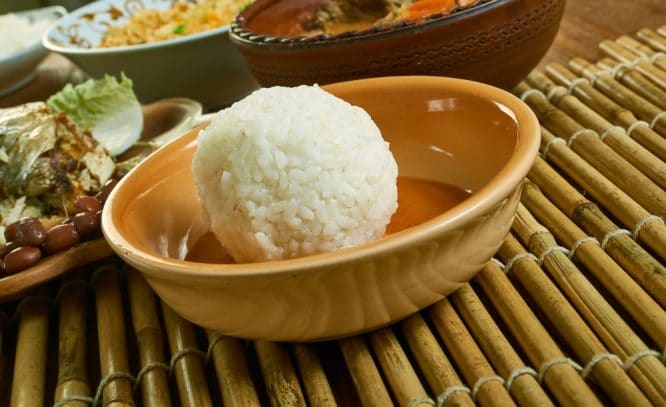 Though this one is technically cheating as it hasn’t officially opened yet, we couldn’t round-off this list of the best African restaurants in London without mentioning Tatale.

Opening later this Spring, it’s the brainchild of celebrated chef Akwasi Brenya-Mensa, who’s already made a name for himself with his famous supper clubs.

The idea behind this new spot in The Africa Centre is to capture the spirit of traditional Ghanaian ‘chop bars’ – an integral part of West African cuisine and ultimately, Pan-African culture.

In terms of the food, you’re gonna be in for a real treat here, with jollof couscous served with mushrooms, shito and a red stew and cassavas bravas both taking centre stage. Those with a sweet tooth will be able to tuck into tasty plantain cheesecake and pineapple tequila sorbet. Sounds pretty darn good to us…