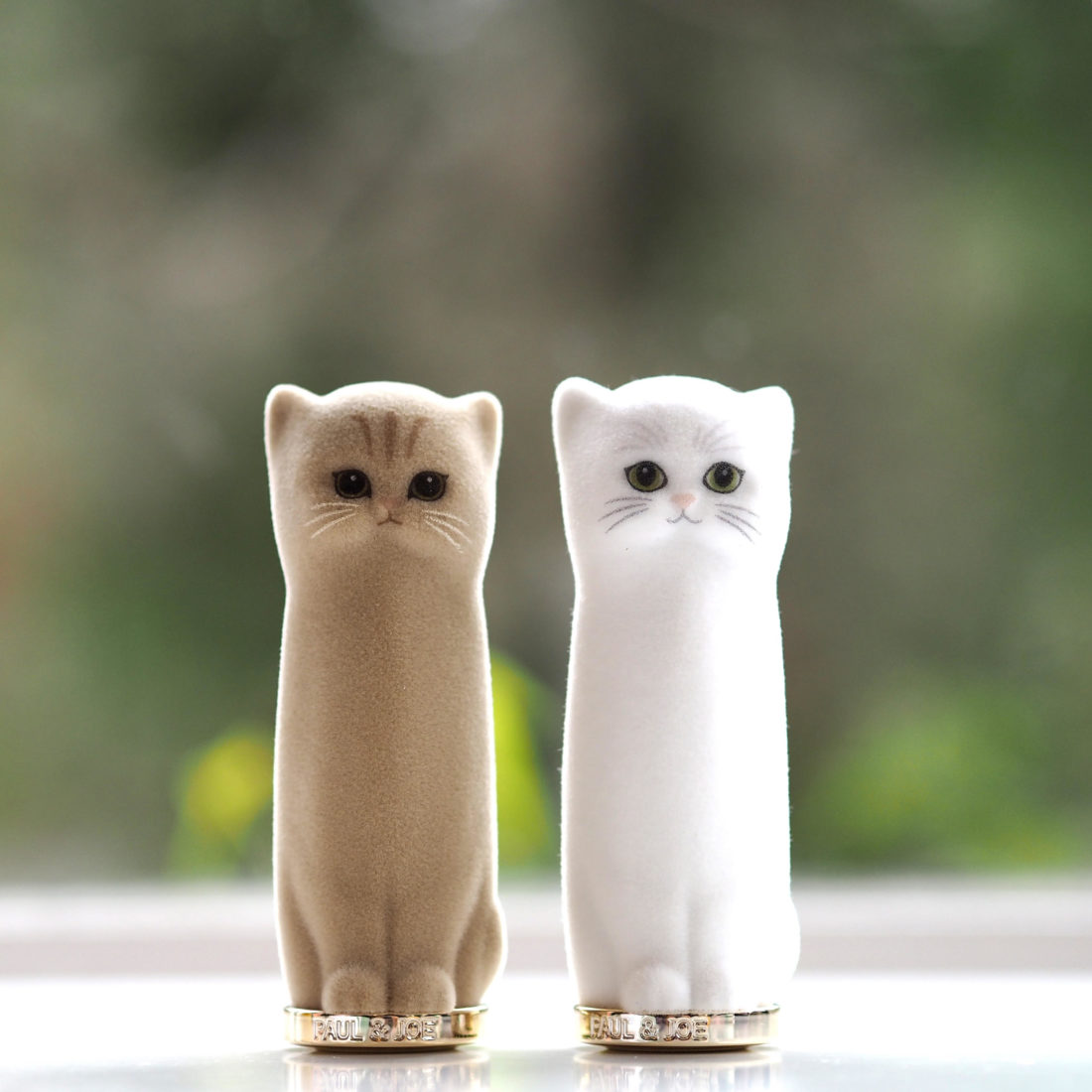 [unpaid/sample] I have so many fun facts that I didn’t previously know myself about the Paul & Joe Beaute brand – and I consider myself to know more than most because I’ve been writing about this brand almost since its inception. I’ve been backstage, sat front row, seen it in Paris and London and keep almost every single item I’m sent (aside from Dior and Chanel, it’s the only other brand I can’t bear to let go unless my mum asks and then I have to ;-)).

Aren’t these the sweetest lipsticks ever? It’s Nounette and Gipsy complete with tactile, flock coats so the hand feel is delicious. Sophie (Paul & Joe founder) discovered Gipsy as a 2 month old kitten at a photo shoot and adopted her on the spot – it was that love at first sight thing that can happen between humans and animals. Nounette arrived a little later as a companion for Gipsy and they didn’t get along at first although now they are the best of friends.

The little cat shaped bullets that we have become used to from this brand have been given a flower instead of a bow at the right ear. The first cat lipstick appeared in 2010 – the product development team needed to find a way to communicate what their vision of a three dimensional cat shaped lipstick looked like so they hand carved real lipsticks to show exactly what they had in mind before handing it over to be perfected. Over the years, the cat’s face has softened and become more friendly from the original (who had a bit of attitude!).

The lipsticks, as usual, come separately from the cases – you pick the shade you like best and slot it in. I had all my lipsticks lined up in the right order to attribute the names to the shades and the lines got knocked over.. so… I *think* I’ve got them back in place! From left to right: 008 Lilac Candy, 009 Sugar Confectionery, 004 Espiegle Ecureuil, 002 Ruben Present, 005 Baskets Rouge.

The shades are in the same order as the swatch. Last month I featured the spring collection of which the cardboard tubes are a feature. They replicate the patterns used in the fashion arm of Paul & Joe but I didn’t know that far from being an earlier adopter of recyclables (although also true), those tubes are based on ‘cartonnage’ which is a type of French cardboard art from the 18th century – rediscovered in a town called Valreas (although cartonnage’s earlier roots lie in Egypt). They were originally used to store silkworms and there are some some good contemporary examples HERE.

In the same order again.

The detailing on the bullets don’t make for great swatches but they’re absolutely fine on the lips – in fact, my favourite shade, Port Secrete (which is that perfect holiday warmed-tone, wine-brown shade but sheer enough to be understated) is wearing down to feel like a normal bullet already (it’s the one I tested most). There are several different finishes – they’re mostly sheer, but 009 Sugar Confectionery has a shimmer, 008 Lilac Candy is a pH colour change finish, 007 Paprike Marine is matte and 006 Carnet Rose is full coverage.

Most of Paul & Joe skin care has an orange flower scent (very mild) which stems from Sophie’s grandmother who used to add orange flower essence to cakes (I’m going to try this!). I think their most famous skin care item is the Foundation Primer (above) which in this iteration is pearl based to give lustre and tone balance. I didn’t know the history of this product which is that it emerged after an in-house innovation competition and was based on the concept of The Little Mermaid – fortitude, brilliance and affection. I hope the prize was good because this is a product that has sold millions of bottles in various limited edition formulas.

Even the outer packaging is quirky – keys, chairs, umbrellas and a glass of creme de menthe (or maybe it’s green juice – who is to know?) and of course, Nounette and Gipsy in real life. Everything launches on April 1st (not joking ;-)) but I will keep an eye out to see if they hit any earlier and give a head’s up because I know they’re going to sell out. The cases are £12 each and the lipstick refills are £14.

For example, an orange flower
fragrance was adopted for skincare products because Sophie
remembered from her childhood how her grandmother used to add
orange flower to the cake she often baked. Loved by customers,
the fragrance was later adopted for base makeup products

The brand’s iconic chrysanthemum motif was inspired by
the design of a vintage cushion cover Sophie found at a flea
market. Initially created for beauty products, the motif was
later adopted for the brand’s other items of merchandise as
well.

PAUL & JOE annually hosted an in-house
competition called the SOZO Award to encourage creative
talent. It was a competition inviting suggestions for existing
and new products, which were judged by an in-house jury to
select a grand prize winner. One product that emerged out of
a SOZO Award-winning idea was the PEARL FOUNDATION
PRIMER. Themed on Andersen’s Little Mermaid, the product
was envisioned as an expression of fortitude, brilliance, and
sparkling affection toward a significant other, embodied by
PAUL & JOE’s iconic Secret d’or pearlescence. The original
PEARL FOUNDATION PRIMER was immediately popular,
and has been re-issued in limited-edition

expression than the current design.

Also iconic are their distinctive paper cases and tubes
suggestive of cartonnage—a type of French cardboard art with a tradition dating back to the 18th century. Originally for
storing silkworms, cartonnage boxes inspired the French feel of the PAUL & JOE paper cartons, which were adopted also
because they show the colors of the print patterns

The Best Ingredients For Fighting Acne

The Best Ingredients For Fighting Acne