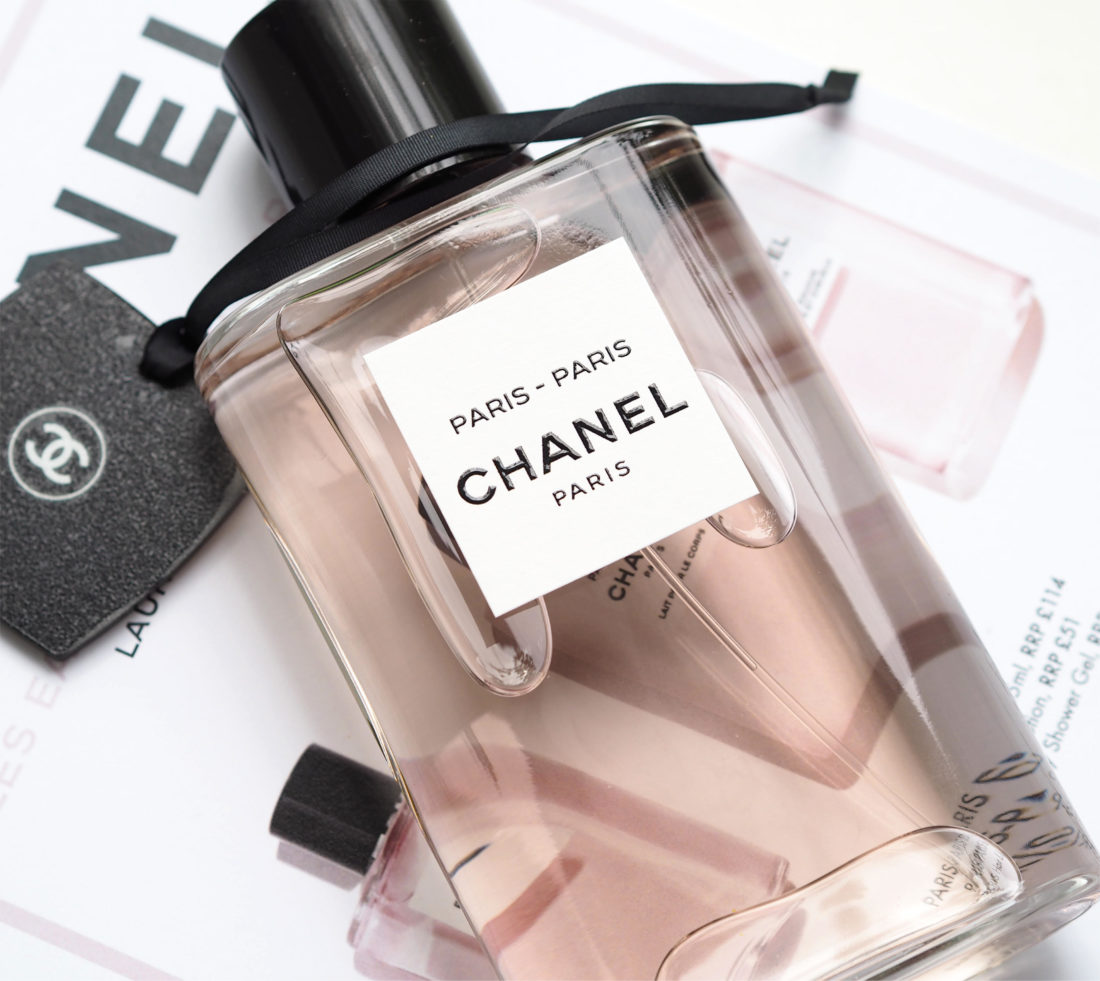 [unpaid/sample/affiliate/ad] Back in 2018, CHANEL introduced six fragrant waters created to be fresh, aquatic aromas that kept their thread to the brand but more lightly. I am CHANEL No.5 forever, but even I know that it can be too powdery-sweet for some. From the original collection, I liked PARIS-BIARRITZ best, possibly biased because Biarritz is one of my favourite places in the world. It’s like a tiny Paris-on-sea. The latest iteration for Les Eaux is PARIS-PARIS.

The original concept for Les Eaux was tied to Chanel’s favourite places to go to from Paris. It makes sense to me, since Paris is so intrinsic to the brand that there should be a fragrance dedicated solely to the city. It’s not as you might expect – I love Paris but when I think of it in my mind’s eye, the first thing that comes up is the Gare du Nord which is quite grotty and then after that it’s the Metro station Barbes Rochechouart and Max’s pronunciation of it which was ‘Barbie Rosh-shwa-shwa’ – I laughed so much that everything hurt. I have no idea how to say it – it might be that, but it was so unexpected when it came out of his mouth.

The one place I really minded about not being able to go to during lock down was Paris even though I had no reason to go and no idea I’d sort of miss the option of being able to go or not  – I’ve been a lot of times and am not SATC about it because there really are some dreadful bits like any major city (although I did slightly have to have a word with myself when I said ‘I miss Paris’ out loud). Paris was, co-incidentally, the last place I visited before lock-down hit for real and had to get the final Eurostar of the night to London clutching a bag of mirabelles (I’d booked an extra seat as a kind of ‘insurance’ when I met Max there for a weekend because the notion was very much looming) two days early leaving Max in a beautiful suite (we got upgraded) on Rue Cambon right next to the original CHANEL store. I don’t know why I’m telling you all this – I have just somehow got on a roll! So, back to the whole point of the review. PARIS-PARIS is rose based – it’s light, fresh and lemony and somehow optimistic and spring-like. It captures that feeling that I can’t really name when spring is turning to summer. It’s that thing in the air that’s better than whatever was previously in the air.

PARIS-PARIS would, under anyone’s nose, run to sweet. The powder is there but it’s not intense. There is a little sharpness with pink peppercorn and a patchouli base that seems the perfect grounding partner to the lightness of the top notes. I have worn this in bed for a couple of nights – hear me out – because I’m in a disturbed sleep patch and heard that if your mind is racing you can smell something, touch something and hear something to stop the roll. It kind of works. I love it – it’s just got all the Chanel-y elements that I like in a more understated dose. Lovely – and lasted.  You can buy PARIS-PARIS as an EDT spray (£114), a Body Lotion (£51) or a Shower Gel (£45)at John Lewis HERE.

Ask Grace: How Can I Figure Out My Skin Undertone?

We’re Obsessed With… The By BEAUTY BAY Tinted Lip Balms

Ask Grace: How Can I Figure Out My Skin Undertone?

We’re Obsessed With… The By BEAUTY BAY Tinted Lip Balms