Since it’s almost summer, we’ve gotten thinking about festival season in London once again. 2022 marks the first full summer of festivals since 2019 thanks to pandemic, so it’s important you kick things off early, given we only had from the end of July to September last year.

City Splash 2022 is just the place for an early festival dance. They’ve bagged both a new date (May 29) in the calendar and a new location: south London’s fine and leafy Brockwell Park.

City Splash celebrates all things reggae and boasts a stacked lineup of over 60 artists across six stages. Guests will enjoy a genre-spanning schedule, from Dancehall to Grime to Dub to Jungle to Roots to Hip Hop to Afrobeats, all celebrating the vast impact and importance of African and Caribbean music on British culture. 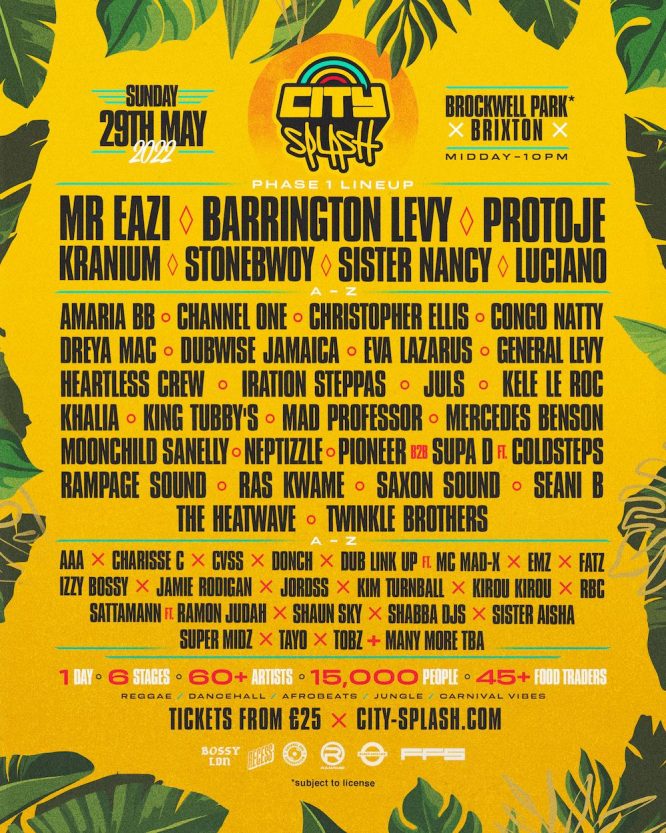 And, this year, the festival is partnering with Black Minds Matter; a charity that works to provide black individuals and families with free access to mental health resources.

Alongside the best in reggae sounds throughout the day, City Splash is also set to host some of London’s top Caribbean street food vendors, in collaboration with Black Eats LDN. Munch down on jerk chicken, vegan ital stew, fried plantains and many more divine dishes. Plus, there will be plenty of rum, craft beer, stouts and spirits to wash down the grub and get you ready for some more dancing.

Talking of cutting shapes, you’ll be doing it aplenty to the star-studded lineup on show at City Splash. Legends of the game, including – *deep breath* – headliners Mr Eazi, Barrington Levy, Protoje, Stonebwoy, Sister Nancy, Luciano and Kabaka Pyramid; as well as Congo Natty, General Levy, Eva Lazerus and many more will pick up the microphones across four stages among the ancient woodland at the site.

Plus, it has just been announced that the stage partners for the day event will be Bossy LDN, Channel One Sound System, Rampage Sound and Recess

Plans To Pedestrianise Oxford Street Have Been Axed