Having opened its doors just last month (July 2022), darts bar and restaurant Oche The Strand is already on a straight arrow path to become one of the hottest gaming spots in the capital. Named after the line from where players can throw, Oche (which rhymes with hockey, FYI), brings together sensational small plates on dedicated set menus, original cocktails, and of course, the game of darts – but with a modern technology twist!

Oche has already enjoyed success in Norway (where it first started), The Netherlands, Sweden, and Australia, and The Strand outpost is the brand’s first in the UK. As you enter, you’ll feel as though you’ve been transported to an enchanted forest with a plethora of greens, golds and wood, plus foliage hanging down from the ceilings and a wall screen displaying a forest scene. 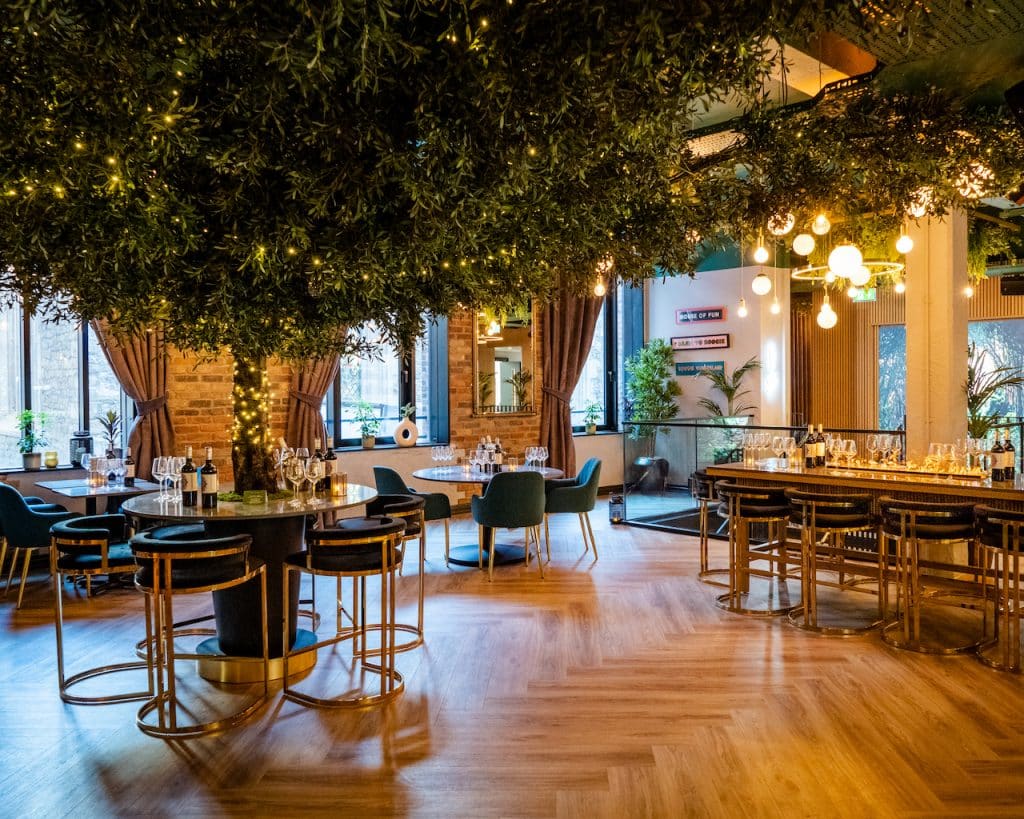 Unlike the run-of-the-mill game you’d see down the pub, Oche The Strand is equipped with state-of-the-art darts tech. With automatic scoring, there’s not a chalkboard in sight, and instead an interactive screen on which you can read the rules of the games, request service, and change incorrect scores should you need. The team explain how to use the screen, serve up complimentary popcorn and then you’re good to go. There are six games to choose from, each addictive as one another, and varying in difficulty. Personally, I loved High Striker and 201 the most. In High Striker, you aim to get higher points than the player before you, or you risk losing a life. 201, like the regular darts version, requires you to get to 0 points from 201 without going bust, subtracting your score each turn. The interactivity of the technology makes the game even more thrilling and fun.

When it comes to the food at Oche, there are two set menus you can choose from – the Oche Menu (£19.90 pp) or the Chef’s Menu (£29.95 pp) – or a range of gourmet pizzas. The Oche Menu offers five divine plates, perfect for sharing with your friends – or opponents. Alternatively, you can score big with the Chef’s Menu; the more luxury option with three additional plates that include oysters, and ceviche. Oche The Strand isn’t just a sports bar with some light bites to keep you going: just as much care is taken on the food as in a fine dining restaurant. In fact, the head chef previously worked at a Michelin-starred restaurant. Influences are taken from all over the world, and the menu fuses local ingredients and international flavours to create easy-to-eat dishes, presented very beautifully. 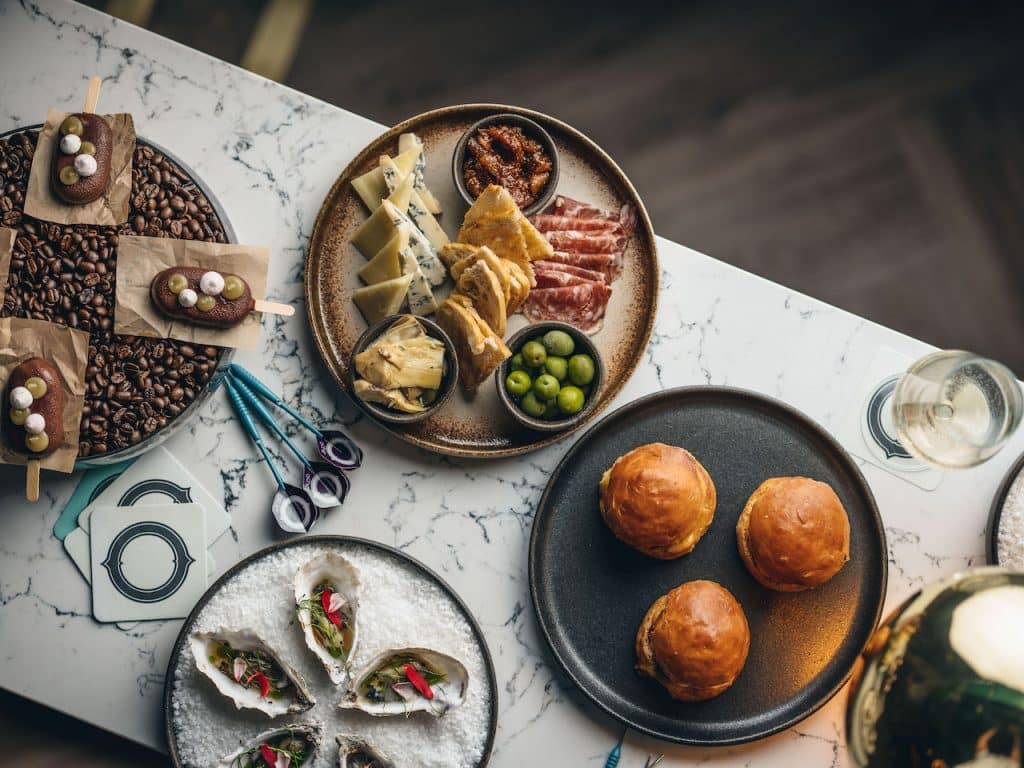 We opted for the Oche Menu, and were left thoroughly impressed. Each dish harmoniously married a range of textures and flavours together, so each bite felt special. The croquette was crisped on the outside, soft on the inside, and had a lovely spicy bite – and the sweet mango that topped it was a lovely touch. The slider was the perfect size to eat between turns, while the Korean pork san choy bow felt healthy, thanks to the lettuce wrap that held together the melt-in-the-mouth, flavoursome pork. Our favourite dish was the spicy tuna almond cone. Firstly, the presentation was show stopping (or should that be game stopping?): set on a bed of ice, your server will lift the glass lid, to reveal the cones in a puff of dry ice. Each bite was fresh and spicy, with a touch of sweetness; I could have eaten so many of them. The dessert was just as delicious, this time presented on a bed of coffee beans, with hard chocolate encasing an indulgent mousse. Vegetarian and vegan options are available too.

Want to raise a glass to the winner, or commiserate a loss? Oche The Strand’s bar is fully stocked with an extensive list of cocktails, spirits, beer and wine. Amongst the classic cocktails, there are five signature cocktails available too, which include the Italian Greyhound (a bittersweet blend of grapefruit soda, Cocchi Americana Rosa and lime salt), and the Clover Club (London Dry Gin, dry Vermouth, raspberry rock candy and pressed lemon), which we highly recommend. Equally, the Mai Tai here was fruity, summery and fresh for a hot day; the amaretto really lifted the flavours. 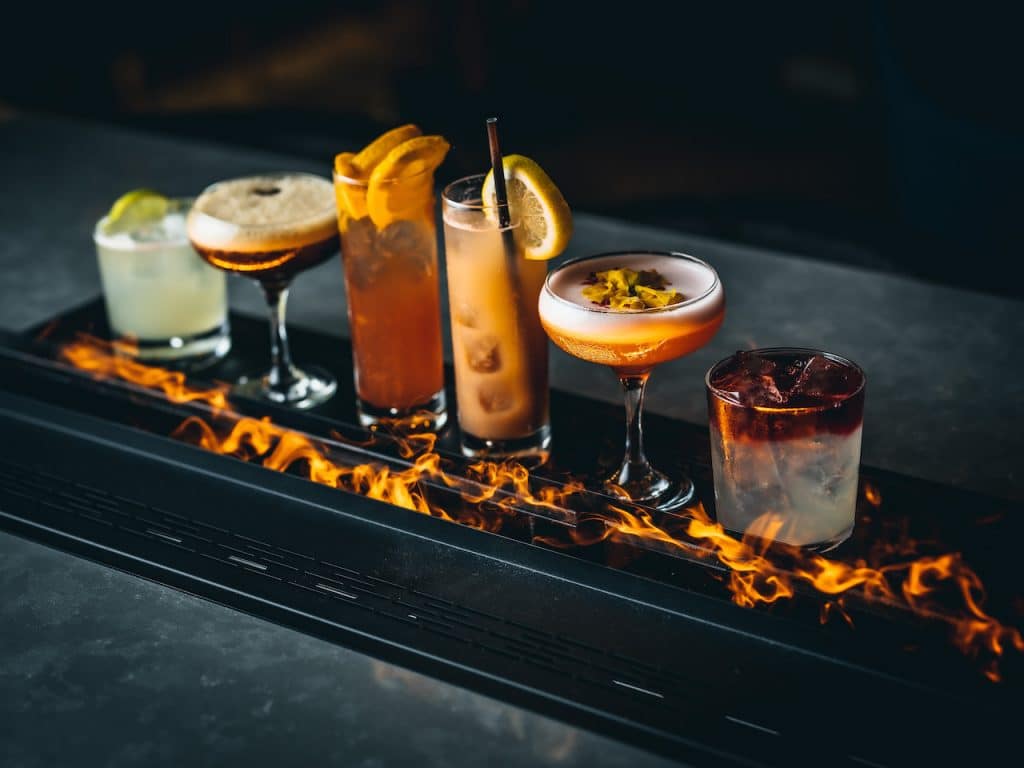 You can book darts sessions for either an hour, or a little under 90 minutes, starting at £8 per person during the daytime, and £12 per person in the evening. It is a great spot to get competitive on a date or with friends, with booths up to 24 people available. The staff are incredibly friendly, and helpful, and embody the feeling of being in a fine dining restaurant, but in a relaxed, gaming setting.