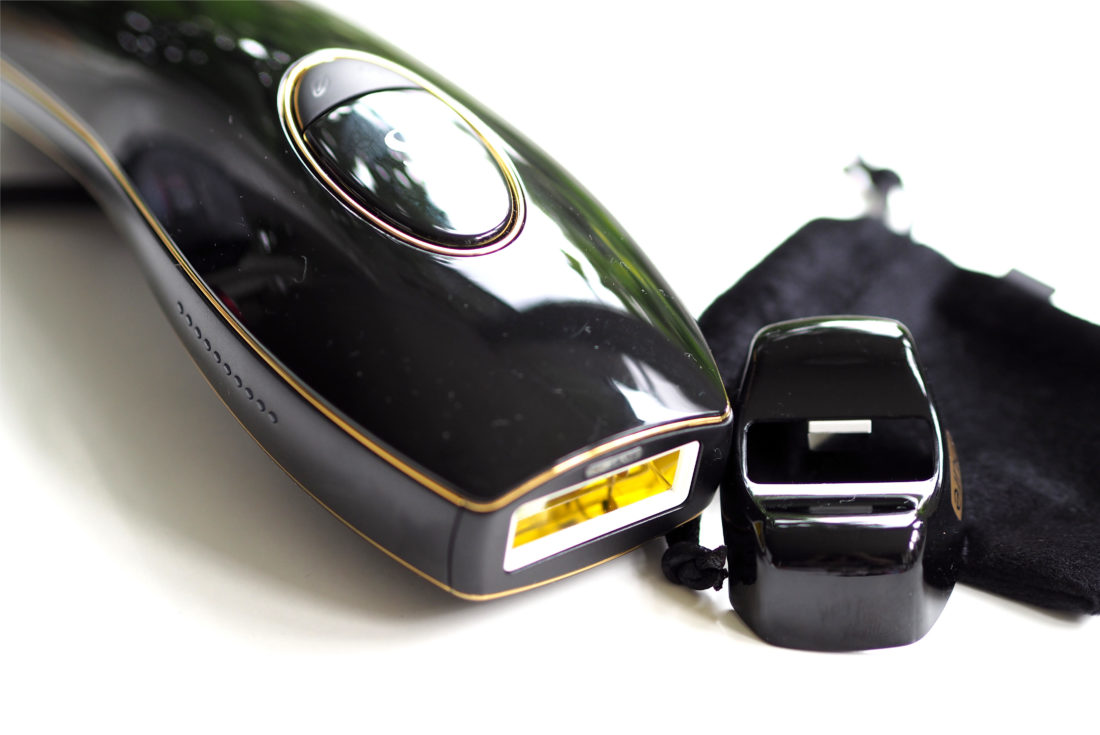 [unpaid/sample/affiliate/ad] I’m very much a fan of home IPL devices having used the Philips Lumea about a decade ago and running a second trial on a volunteer a few years later. Since I used it, I have never had to shave or wax my legs again other than a few strays that somehow missed the light. The place I didn’t persevere was my underarms so I’m trying the SmoothSkin Pure Fit Home IPL Device to see how these devices have changed. I’m going to wait until I’ve been away to Spain this weekend and then start trying it.

I’ve been going over my old reviews (made myself laugh all over again at the ‘hard to reach areas’ reference in the Lumea manual which at the time I concluded was the bum and that would still be my guess now) and the biggest and most obvious upgrade is the streamlining of the equipment. The SmoothSkin Pure Fit Home IPL Device is about the size of a house phone compared to the size of a hairdryer as it was. It’s not featherweight – there is still a bit of heft in it but really, nothing to complain about.

The wiring is a bit unwieldy but it’s plenty long so you don’t find yourself stuck in an awkward corner of the bedroom on the floor. IPL stands for intense pulsed light and the device gives out multiple wavelengths of light that are converted to heat, which in turn, destroy the hair follicle. I remember the last time around I drew a grid on my legs so I wasn’t going over the same area twice but now I think I was over-reacting and got a bit caught up in the precision process. The device will give a green light when you have perfect contact and a red light if you don’t so as long as you are methodical you won’t end up going over the same area twice. I’ve had a little test run on my leg to get the feel of the device – you get a little ‘snap’ with each light emission but I am pretty sure it is far less painful than my previous experience. The device has a ‘personalised intensity level’ which I haven’t quite figured out yet whether that is what’s making it easier, and there’s a smaller head to use on upper lip, toes or chins (I hadn’t even thought about toes-  but now I have, there is a need, let me say!).

The above pictures illustrate who can’t use this particular device. The IPL device relies on detecting pigment and if there’s none to detect, it can’t do its job which is why grey hair is ruled out. Black skin pigment contains melanin which is what the IPL targets to destroy the root so this device isn’t suitable for you if are deep toned. If you’re thinking about IPL and just starting to get greys (quite a shock to get a grey armpit hair!) now is the time to zap away the hair before it all goes grey. I have some greys but plenty enough pigmented hair to be able to give this a test run which I’ll do for about 8 weeks. Results are promised in 4 weeks but I feel that’s maybe too soon and the longer I wait, the better the result I should see and I’ll post Part 2 when I do. Three months should see you hair free but you will still have to do ‘reminder’ sessions every now and again. I know that home IPLs work really well – I’ve never tried using one on my face but ten years ago my chin wasn’t trying to do an impression of ZZ Top and now it is so here we are – I might even finally tackle that weird single hair that grows out of the side of my knee for no good reason whatsoever. The SmoothSkin Pure Fit Home IPL Device is on offer at £222 (from £279)  HERE and take an extra £10 off using code BBSS10.