True, many will say you should go Vegan full time for its vast benefits to the planet (not to mention health and ethical arguments) and true, there is always great vegan food to be found in London. No one is denying this, BUT, January is a particularly great time to adopt a plant-based diet, if only to take part in Veganuary.

Millions around the world give up meat for a month as part of Veganuary, and as a result, plenty of businesses offer menus and specials throughout the month that you wouldn’t normally get. Here’s some of the finest limited-edition plates you’ll find across the capital this month.

Veganuary menus and specials from businesses that aren’t fully vegan 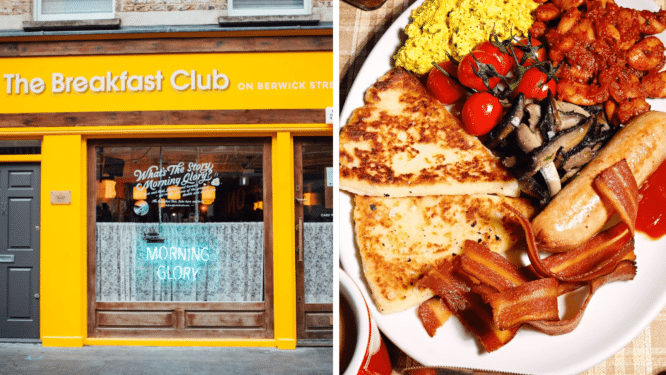 There’s plenty of these scattered around London, but one of their spots is going vegan for the entire month of January, offering up a treasure trove of plant-based dishes including a fry up made from Redefine Meat sausages, La Vie bacon, potato scones, Breakfast Club posh beans, scrambled tofu, mushrooms and roasted tomatoes. Their Soho branch is the all vegan site, but across their other sites you’ll find their new plant-based options to chomp down on. Read more about it here!

We’ve raved about this Indo-Chinese haven before, which serves up delightful dishes to many a theatregoer in the West End. Handily, if you’re doing Veganuary, you won’t miss out on their beautiful flavours, as there’s a dedicated menu boasting items including Momos, Bombay chilli mock chicken with celery, and a mean sizzling brownie. Check out the full special menu here! 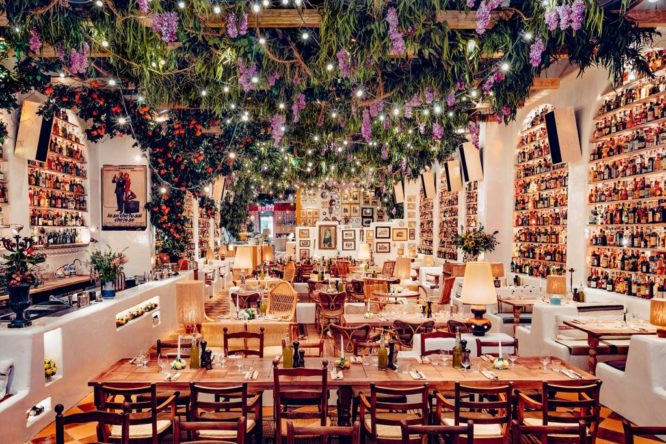 You’ve probably heard us bang on abut the holy trifecta of truffle pasta connoisseurs (Gloria, Ave Mario and Circolo Popolare) many a time. Fans will be delighted to hear that a special menu welcomes in a new entrant this month, in the form of a vegan pizza. The Feel Gourd Vibes Pizza is concocted using pumpkin cream with thyme, fresh spinach, Julienne Bruno vegan cheese, pine nuts – and it’s safe to say the results are spectacular. View the full menu here! 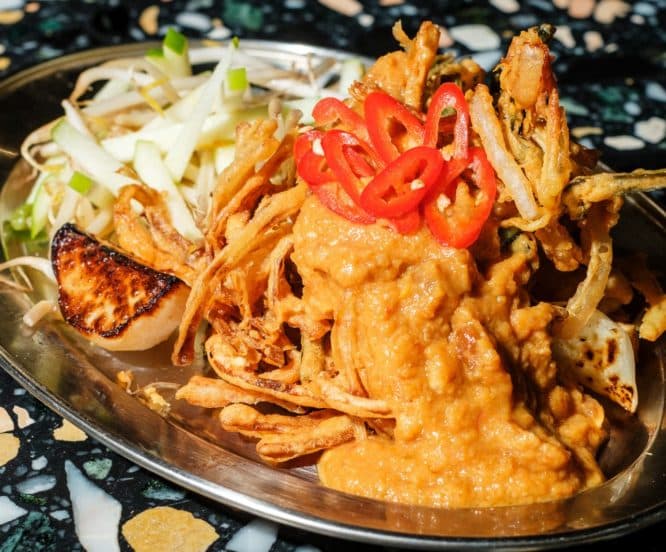 A pocket of Malaysian flavour lies in Market Peckham, and this month you can go to town on their vegan offerings. Part of Michelin-star trained Abby Lee’s latest venture, Mambow packs a punch with a helping of Pasembur (onion fritters with sweet potato and peanut sauce with grilled turnips and apple slices); a splash of Pumpkin Kapitan (roasted pumpkin wedges in a lemongrass, turmeric and coconut sauce curry sauce with sugar snap peas & deep fried spring onions; plus much more. Check out their menu here. 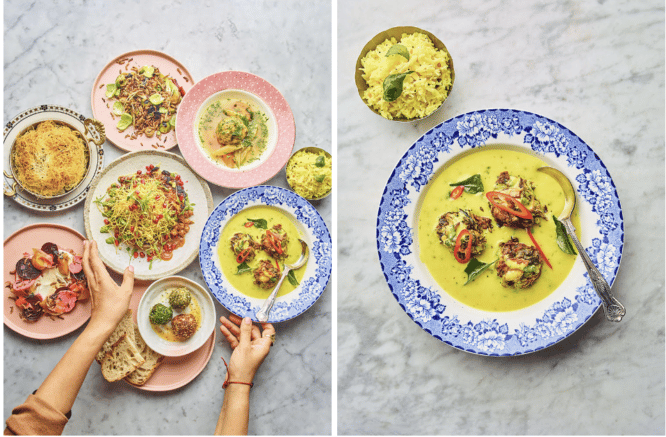 A key part of Marylebone’s dining scene, Jikoni is opening up for lunch this month to serve an entirely vegetarian set menu, honouring the fine produce of Jikoni’s biodynamic farm partner, Waltham Farm. The menu gets you a snack, starter, main, side and dessert, with both vegan and vegetarian dishes at play. I’ve got my eye on the soy marinated Waltham Place beetroots with whipped tofu and pickled ginger; and the potato and collard greens pakora, but there’s plenty of different palettes covered here, so take your pick. You can view their entire set menu, which runs between 12-3pm every Wednesday – Friday. Find out more about Jikoni here. 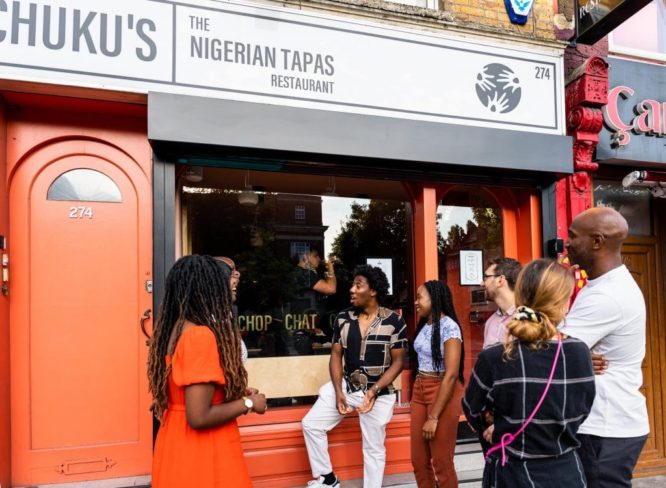 Chuku’s is another spot we’ve absolutely raved about in the past, championing their flavour-packed Nigerian Tapas Brunch. This month, anyone and everyone can devour their vegan offerings, which come in the form of multiple small plates including Adalu, a slow-cooked comfort stew; Dodo, fried plantain tossed in cinnamon sugar and coconut; Jollof Quinoa; and much more. You’ll find it in Tottenham, and it’s a must for any vegan meals out this month. View all of Chuku’s menus here.

Crust Bros are the masters of personalised pizza across three London locations (Waterloo, Wandsworth, Boxpark Croydon), but this month they’re offering up a divine vegan pizza this month. It’s called the ‘Little Miss Sunshine – which, let’s be honest, we all need a bit of this month – and it’s made up with melted veganarella, yellow datterini tomatoes, and ve-du-ja, a vegan play on the ever-popular nduja that people love to slather all over their pizzas. Head down this month to try this beautiful creation, and find out more about Crust Bros on their website.

Over on Wigmore Street, you’ll find Cavita, one of London’s finest new restaurants serving up devilishly tasty Mexican dishes. This month, it’s a paradise of plant-based cuisine to match the leafy overhanging plants that decorate the restaurant. Vegan dishes come in the form of Mooli and pomegranate ceviche, with amaranth, avocado, lemon leaves, lime, habanero and nasturtium flowers; a Tetela de calabaza, filled with butternut squash and crushed chickpeas, served with morita sauce and mixed herbs; and much more! Read more about Cavita here!

With classy interiors and authentic Indian dishes, Dipna should always be high up your restaurants in London lists. This month, they’re serving up a mean selection of vegetable samosas, vegetable biriyani and channa masala, and anyone who’s doing Veganuary should be heading down for their Chollay bhatura, chickpea curry with a puffed bhatura and mango chutney; which features on their brunch menu. 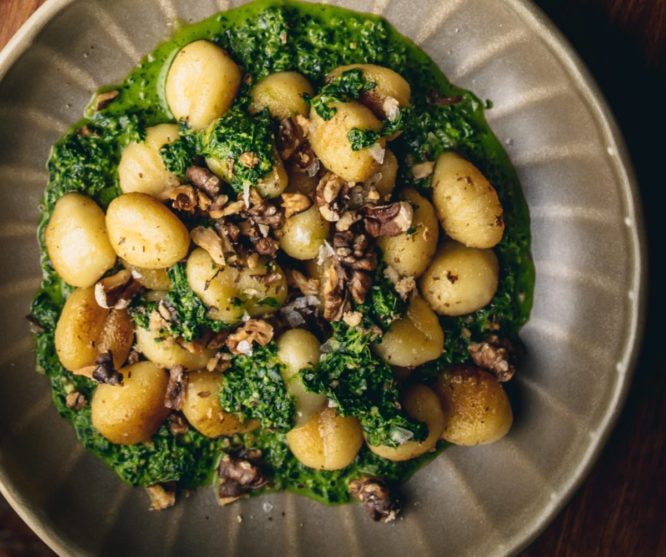 Over in Fitzrovia, you’ll find Norma. This month, they’re celebrating Veganuary by offering a fine spread of Sicilian dishes. The tasting menu for two is a tour de force of flavour, offering up a tempting gnocchi, cavolo nero pesto and walnuts; a plate of stuffed artichokes, pine nuts, garlic, chilli, pangratato and almond sauce; and much more. Read more about Norma here!

A croissant with vegan n’duja and brie? Yeah, it’s time to sprint out the front door without pausing to slam it shut. Who do we have to thank for this creation? Charles Artisan Bread, of course, who are also offering a cheese and tomato and a cream cheese croissant through Veganuary. All hail the power of pastries. Read more about them here.

If you can’t wait for their brand new treats kiosk, then you’ll have to try out their fabulous vegan offering this month. Pizza Pilgrims always have a sturdy selectin of circular dishes to sift through, but right now you’ll want to try their guest pizza, The Vegan Caprese. It’s topped with datterini tomatoes with vegan basil pesto, and plant-based Stracciatella cheese. Get those orders in. Now. Check out Pizza Pilgrims here.

Eataly needs little introduction, and the Italian food hall that powers through Liverpool Street has a tasty array of vegan dishes this month. Check out their Pizeeta all’ aglio, a flatbread topped with garlic before moving on to the tomatoey goodness of the Eataly Spaghetto and topping it all off with Ciambellone al cioccolato vegano – a donut cake with crunchy nuts, dried fruit and icing sugar. Molto bene, all around. Read about Eataly here. 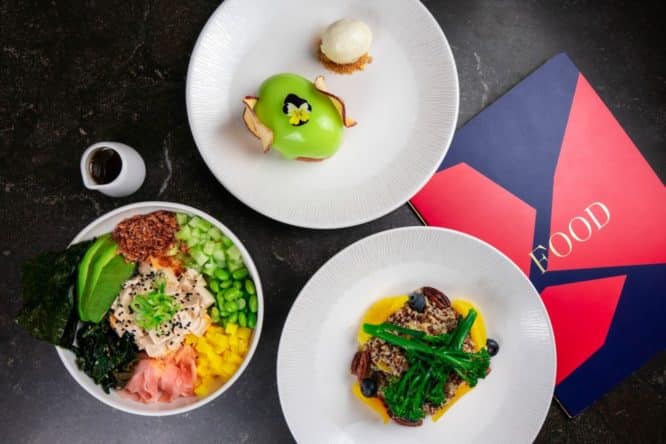 The wellness hotel has curated special Veganuary menus across their restaurants, with the highlight being this delightful vegan afternoon tea. Sip on Taittinger Champagne and munch down on a butternut squash, vegan cheese, and apple chutney sandwich before the indulgent scones and pistachio & raspberry slices come out to the party. Plus, when you book here, you’ll get a sweet 25% off throughout the month .

Atis are the masters at healthy food bowls that are dazzling to look at and deliver a rush of flavour into your soul. They’ve got a couple of predictably brilliant vegan options this month that come in the shape of ‘The Winter Bowl’ and ‘Plant Therapy’. The former boasts shredded Kale, cabbage, baby spinach, orange slaw and smoky beetroot, and goat’s cheese (which you can remove to make completely vegan!); and the latter is a concoction of shredded Kale, cabbage, romaine lettuce, tahini chickpeas, pickled red onion, cucumber, turmeric cauliflower, smoked almonds and tahini dressing. Only issue is, which one do you pick? Read more about Atis here.

London’s first inclusive sports bar, run by James Cochran (who we’re pretty familiar with), is one you need to visit this month for the name of their plant-based burger alone. The ‘Drip Too Hard’ comes in collbaberation with EatPlanted, boasting vegan buttermilk chicken tenders, vegan bacon, XO sauce, Szechuan cucumbers and citrus mayo – not a bad bit of scran to watch Arsenal continuing to march on to the league title, is it? Read more about Valderrama here!

You’ll find En Root in multiple locations around south London, each guaranteeing a fine array of plant-based Indian food. This month you’ll find limited Veganuary options including an Indian-inspired take on Mac and Cheese, and a Winter Stewdem with Kenyan style cassava, corn and coconut. Both dishes go alongside the En Root classics, and if you’re not feeling like a meal out, then there’s also a sweet 20% off all month on JustEat. Check out En Root here.

18. We Are Vegan Everything (WAVE)

The duo of beautiful vegan cafés in Hackney and Stoke Newington are offering 2-for-1 deals on many of their vegan items throughout the month. Fancy getting bang for your buck on apple crumble pancakes – yes, you read that correctly – or a plate of Belgian waffles (exclusive to the Stoke Newington site)? Head down now, and try some of their brilliant savoury vegan dishes before indulging yourself with these fine desserts. Read more about WAVE here!

You think London’s first fully vegan pub wouldn’t have something lined up for Veganuary? Think again. Over at the Spread Eagle you can tuck into a limited menu that’s only around this month, and it’s sounding pretty darn delicious. Their selection includes plates of the big and small variety, from a mushroom kebab to tandoori cauliflower to a mean sounding sticky toffee pudding. Ah, pints and pudding. A combo for the ages – find out more via The Spread Eagle’s website!

Veganuary at Mildred’s, London’s string of beloved vegan restaurants, takes on the theme of the Vietnamese Lunar New Year. Until January 31, guests can order new items including the Char Siu Mushroom Bánh Mì, which is made with pulled oyster mushrooms, chilli mayo, mushroom pâté in a fresh baguette. Plus, there’s plenty of mocktails for you to sift through, paving the way for some merry celebrations. Read more about Mildreds here.